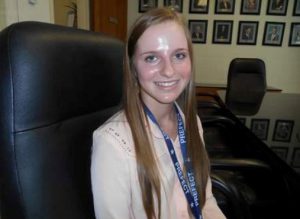 Danielle Campbell is a senior at Berkeley Prep and suffers from Cyclic Vomiting Syndrome.

TAMPA – Danielle Campbell is a typical high school senior who works hard at getting good grades, is a popular athlete, enjoys an active social life, and can’t wait to move on to college and the next chapter in her life.
Oh, besides that, she has spent much of her youth sleeping next to a toilet on the bathroom floor.
Danielle suffers from a rare illness called Cyclic Vomiting Syndrome. In her own words, she knows the disease sounds “gross.” She has only recently started feeling comfortable going out in public, knowing she might vomit.

Disgusting? It might sound that way, but Danielle, a senior at Berkeley Prep who hopes to attend college at Lehigh next year, is comfortable talking about it. She is helping host a golf tournament at TPC Tampa Bay on Sept. 14 to benefit the Cyclic Vomiting Syndrome Association (CVS).

CVS is a stomach condition that is characterized by nausea and vomiting. Danielle said she still often feels nauseous in the morning, although not as bad as it was in the past. The condition is not life threatening and, even though there has been so little research on its causes, Danielle said it isn’t genetic. No one else in her family suffers from it. And while the condition has caused her much suffering, including missing out on many activities, for the past two years she has had perfect attendance at Berkeley Prep.

“I would sleep on the bathroom floor for days at a time,” Danielle said before golf practice last week. She is a co-captain on the Berkeley Prep girls golf team and shoots in the 80s. Still, she is often nauseous on the course. “It changes from one minute to the next. It makes me feel gross and terrible and I want to do something about it.”

She still suffers from the nausea, but it’s something she has lived with her entire life.
“It is something I was born with,” Danielle said. “I have been getting sick, especially in the mornings, for as long as I can remember. I spent many nights going to sleep on the bathroom floor.”
Danielle started vomiting – called episodes – around the age of 5, although it may have been earlier. She grew up missing a lot of school, almost never making it there on time. Personally, she feels the episodes are brought on by anxiety, but research on the subject seems to indicate multiple possible triggers. And CVS can be serious, besides the possible social implications.
Prolonged episodes can result in mild bleeding from the esophagus as well as life threatening severe dehydration.

Danielle took medication for a while, but she said it made her feel even worse.
To Danielle, it only seems natural to try to do something to make people aware of CVS, so she organized the golf tournament to raise money, something she has done for other causes she feels strongly about. She was involved with “Happy Feet,” a fundraiser for cancer victims, and hosted a run around the Berkeley Prep campus to raise money for Wounded Warriors.
Danielle knows she may have to live with CVS for the rest of her life, but she’s not afraid to leave Florida to go to college. She’s ready to move on with her life – even if it means taking CVS with her.
“People don’t realize how many people are affected by this,” Danielle said. “I just hope I can do something about it.”

For more information on CVS, check cvsaonline.org. To sign up for the CVSA Golf Tournament, contact Danielle at campbdan@berkeleyprep.org.