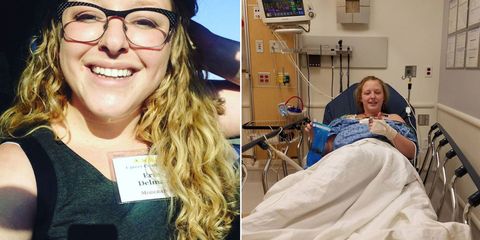 Erin Delman, 25, is a fourth-year PhD student of earth system sciences, specifically studying the relationship between climate change and conflict, at the University of California Irvine. After years of violent, unexplained vomiting, she was diagnosed just three months ago with cyclic vomiting syndrome (CVS), a condition so rare that the exact number of patients is unknown (The National Institutes of Health estimatesas few as 4 out of every 100,000 children have it — it’s even less frequently diagnosed in adults.). Delman, who is currently on her second medical leave from grad school, spoke to Cosmopolitan.com about the years-long diagnostic process, what her episodes are like, and how she explains the condition to people who simply don’t believe it exists.

Starting in 2008, when I was at Union College, I was throwing up more than normal people — probably every couple of months. I would wake up at about 2 a.m. to puke and would be sick for 16 hours. I always thought it was because of drinking, even though I actually hardly drank at school. When people would just say, “Ugh, I’m hungover, I need a coffee, brunch, and an Advil,” I would think that sounded unbelievable. That’s probably when it started, but I didn’t notice [something was wrong] until my first year of graduate school, and the beginning of my second semester. I was so sick.

At this point, I was throwing up every day, multiple times a day, for two or three months. It was horrible. Then it mellowed out and ended up being once or twice a week, but at the end of my first year of graduate school, I took three months off for medical leave.

To be honest, I was discreet at first [with my family]. I figured it was food poisoning or stress or a sensitive stomach. My father’s a physician and mother is an RN, so when I had these symptoms, my father would call a gastroenterologist he knew and they would tell him how to treat me — but that didn’t work either. My mom would drive 45 minutes to give me a shot at 3 in the morning and she’d come clean my apartment if I couldn’t. When it got really bad, [my parents were] extremely motivated to identify a doctor, acquire a diagnosis, and develop a treatment regimen. We talk a lot about my condition in my family. It helps having a doctor, nurse, and soon-to-be-doctor [my brother] in the family, and it’s funny how they transition from family mode to physician mode; a simple “How have you been feeling recently?” turns into a bunch of clinical questions.

I was going to all kinds of doctors. They found out that I have low immunoglobulin levels, which suggested an immune deficiency. I saw an immunologist, but he didn’t really [have the] answer. I went to a psychiatrist to see if it was something that was related to mental health and they ruled that out, but I thought I was having a mental breakdown. I’m in a PhD program, it’s really high stress, and I couldn’t figure out why I was throwing up all the time.

Then one day, my twin brother who is in medical school sent me an email with just a link to a website on cyclic vomiting syndrome and he’s like, “I think this might be exactly what you have. It seems to fit your symptoms.” I actually have never asked [exactly how he found the link]. My brother is super intelligent and a thorough worker, so I’m sure he just came across it during class. He forwarded it to my parents, and they were able to find me a GI specialist in Los Angeles and then a cyclic vomiting syndrome specialist in Texas. I met with him about three months ago and was diagnosed.

How it works with cyclic vomiting syndrome is patients have what are known as “stereotypical episodes.” My episodes are almost exactly the same every time — I wake up at about 2 a.m. and I start vomiting. It’s incredibly violent and very painful. This is serious retching. After the first hour, I stop throwing up solids or fluids and move to bile. I’ll drink Gatorade eventually because it becomes so painful to just puke bile. So I’ll just drink and throw up, drink and throw up. I vomit every five minutes until I’m medicated.

As far as treatment goes, it depends. Every day, I take amitriptyline and CoQ10, which work to prevent episodes [Editor’s note: Amitriptyline is an antidepressant and nerve pain medication used to treat migraines; it’s believed cyclic vomiting syndrome falls on the migraine spectrum, and amitriptyline in combination with CoQ10, a coenzyme made in the body that assists with the basic function of cells, has proven “highly effective in the prevention of vomiting episodes.”].

I live about 45 minutes from my parents and if they’re around when I’m having an episode, they will drive to me. My boyfriend James, who I’ve been with since October 2015 and live with, will help, but if he’s not around, [my parents] will give me a shot of promethazine [Ed. note: A motion sickness medication also proven to be successful in treating CVS episodes.]. My boyfriend is really helpful because he’ll give me shots of ondansetron [Ed note: Ondansetron is Zofran, an anti-nausea medication.] when I get too sick. He’s a former Marine, so he is pretty tough — he has cleaned up all types of bodily fluids.

I also really hate needles, so if [James or my parents] aren’t around, I’m sometimes forced to take suppositories which are rectally inserted, but unfortunately when you’re puking, it’s just not always possible. Very occasionally, I’ll have episodes in the middle of the day and I have about a two- to three-minute window when I know it’s going to start — I’ll get really pale, salivate a lot, and start shaking — and I can take my pills [Ativan and dissolvable Zofran] to try to stop it, but I’ve never been able to abort an episode.

Last year though, I had an episode in Colorado and I had to go to the hospital. It was maybe five hours before I was able to get medication and I puked about 12 times an hour during that time. I actually had to call an Uber to take me to the hospital because I was passing out from dehydration [By that point,] I was mainly retching with a small amount of bile, so it stopped getting messy, so when the Uber arrived around 5:30, I called him to explain my condition and ask if he was willing to transport me. He was compassionate and understanding; he helped me into the car and into the hospital. He kept trying to distract me by telling stories of college students he’s driven from CU, and it was a nice gesture, but I couldn’t stop retching into the bag. Not my greatest moment.

In the last year of grad school, I had another three months where I was puking almost every single day. By this point, I had missed weddings, family functions, parties, events and exams because I was so sick. Before I was diagnosed, I felt bad too. I was a TA and had to have my colleagues cover for me and you know how it gets in school — I would bail on my friends a lot and I was a flaky person to begin with. It was difficult for my friends to believe me. It really is an unbelievable condition. It sounds like you’re making stuff up! But a bunch of my very close friends [had seen] an episode at some point.

I started crying at [the appointment I was diagnosed] because [the doctor] told us twice that this was a debilitating condition — especially before you start treating it — but that it was not terminal. I feel very fortunate that there’s no long-term prognosis that I should be concerned about, but it’s really made it difficult to function. It is incredible it took so long to receive a diagnosis because it seems so obvious now, but I think that’s typical of cyclic vomiting syndrome patients. It’s a diagnosis of exclusion, so it takes a lot of work to narrow down the conditions.

Having a physician tell me, “This is a neurologic condition with these treatment options,” made me feel unburdened. I was and am really into school, and this has really impeded my ability to be a good student and [in the future] be effective in my field. And I took a lot of that sense of failure onto myself. I don’t think I gave myself adequate room to heal, so having this big physician at this big hospital tell me that it was OK helped a lot.

HAVING A PHYSICIAN TELL ME , ‘THIS IS A NEUROLOGIC CONDITION WITH THESE TREATMENT OPTIONS,’ MADE ME FEEL UNBURDENED.

I keep a diary so I can track my episodes: what they felt like, when they happen, how long they lasted, what meds I took, etc., and I’m trying to identify triggers. I haven’t [noticed any patterns with triggers of episodes], but I’m always stressed out and a lot of people report stress — either happy or sad— is a trigger. The main thing I’ve noticed is that I need to make sure I get sleep. If I try to pull an all-nighter, I will definitely be sick. Also, my period. I get sick almost always around menstruation. I’ve been told it can take up to six months for [the amitriptyline and CoQ10] to officially work, but I think it’s getting better.

I guess it’s the same with all invisible illnesses: You can’t always explain to people what’s going on, especially when you’re so sick. I want people who have friends with a condition like mine to know that we really appreciate all the help. It’s gross. It’s a really disgusting condition! It’s hard to get that gratitude across when you’re sick, but I don’t think I’d be able to function right now without my parents, my brother, my boyfriend, and my friends. Having them is a huge comfort that I know I’m privileged to have. Without my parents and brother, the months leading up to and following the diagnosis would have been much more difficult.

What’s amazing is that I feel totally fine when I’m not symptomatic. You have to laugh about it when you’re feeling good, ’cause otherwise it’s impossible to just live.